the past few days 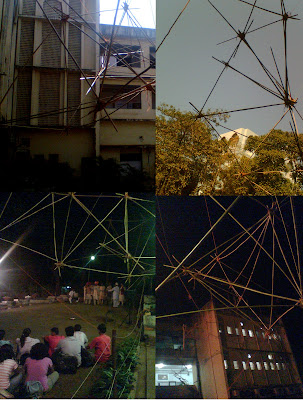 so the annual week ends today. yesterday below the slowly expanding bamboo creatures heading to a point above the lawn a group from maharashtra presented a curious mixture of incompatible concepts traditional marathi fok music. nationalism met communalism and ram bhakti through laal jhandaa sloganeering and progressive socialism. powadas and lawnis twisted to become moral tales with shivaji and jyotiba phule playing central roles. these two characters seem to blur all ideologies.

later prasad, kaushik, mohua and me took the student council out to harish for dinner and drinks minus tapan and apurva. those who were there were maitri shah, jeet, aparna, dipie, viral and maitri dore. sweethearts all of them. and the previous night was the fresher’s return at poison in bandra. hip hop music that relentlessly throbbed loud and heavy. had to leave in an hour.

Posted by Anarchytect at 9:01 am